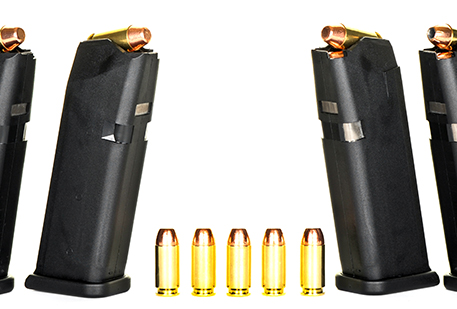 The first thing you probably notice about a cool sports car may be the lines of the car, the paint job, or maybe accessories like the wheels, spoilers, and trim. Unless you’re a gearhead or a mechanic, you don’t think too much at first about what’s under the hood.

Our pistol magazines are like that. They aren’t very sexy, but they’re the heart of an auto-loading pistol. We “ooh” and “ahh” about finishes, grips, sights, barrels, triggers, checkering, and all sorts of other doo-dads on a pistol — and they are all neat — but the truth of it is that the magazine is where it’s at.

A good magazine will make a pistol run like a felon on his ‘third strike’ but a bad one will make it choke like a chubby partner wolfing down his lunch too fast in between calls.

A Critical Component (Often Overlooked)
A lot of shooters fuss over getting every nook and cranny of their pistols sparkling clean, but they ignore the magazines entirely. That’s like washing and waxing the car every week, but ignoring the required oil change.

Magazines tend to accumulate a lot of dirt, carbon fouling, and other debris. They get dropped in the dirt and some of the “exhaust” from the “combustion chamber” gets funneled right into them during shooting. They pick up lint and other debris while being carried around in pouches or pockets.

Most of the time they can chug along despite these things, but a good cleaning once in a while will do wonders to ensure your pistol continues to run reliably. Here are a few simple steps to get your started.

1. Simple Brush and Patch: Routine maintenance for me includes brushing the follower with a toothbrush and wiping it clean with a patch. I also wipe down the outside of the body. That’s about it.

Once in a while though (especially if they have been dropped in the dirt), you’ll want to give them a really good cleaning, and that takes tools.

2. Some Special Tools: If you don’t have a good magazine cleaning brush, get one and sin no more. They’re cheap and very effective. My favorite is the GTUL, which is designed for the Glock but works great on any widebody magazine.

If you’ve got a Glock, you’ll want the combo kit which includes the GTUL itself — a little collar that helps you compress the tabs on the magazine body so you can slide the floorplate off. The GTUL works great and you’ll wish you bought one years ago. I promise you’ll do a lot less cursing at the workbench after you get one.

Before the GTUL brush, I used to have a few brushes that were purchased at a kitchen store for cleaning glasses and vases. They worked okay, but I like the GTUL brush better. It’s more rugged, is properly shaped to get into the corners, and it also has that neat punch at the bottom for disassembling the magazines.

3. Some Disassembly Required: To clean a magazine with a removable floorplate, disassemble the magazine and scrub all the junk out of the tube. Wipe down the inside of the tube, the follower, and the spring with a clean patch to get any remaining junk off, but don’t oil any of the magazine parts or the magazine body.

You want to keep the magazine dry on the inside, because oil will just attract more junk. “Clean and dry” is the rule here.

Remember to wear safety glasses when you’re disassembling and reassembling the magazine, because all those parts are under spring pressure — you don’t want any runaways causing injury.

For magazines without a removable floorplate, you can push the follower down through the top of the magazine (a toothbrush handle works pretty good for this) and then slide a pin into the body from side to side through the “witness holes” to trap the follower in the compressed position.

Then you can scrub it out — at least as best you can — through the top. Sometimes you might need to just soak the whole thing in cleaner/solvent or use one of those spray chemicals to flush it out. Make sure you let them drain for a while to get all the liquids out.

It’s tough to do a great job on these kinds of mags, but you can usually get them clean enough if you try. Anything is better than nothing. Sometimes you might just need to replace a really fouled mag that resists cleaning. Mark the old one so it doesn’t get rotated into your duty gear.

Taking care of your magazines is a cheap life insurance policy. Take a few minutes to check yours out today.